Saturday’s Winter Flakes Race was a huge success. Over 180 runners signed up to pound the streets of DeSoto with 36 completing the 10K distance! Although there were some hiccups (like a house fire a block from the 10K route), no runners were lost, there were no injuries in the house fire, and everyone had a great time running the race.

Thank you to all the runners and walkers who took part in the race. We had great weather and a great crew of people who came out. Results are available here, but just to give you some idea:

This sort of race takes a lot of coordination, and this year’s Race Coordinator did a great job. Lynnsie Kerperien oversaw the details of the race as our new Coordinator and kept all the race pieces running smoothly. If you know her, give her a pat on the back because she did fabulous work.

Special thanks also goes to Angela Edwards, who oversaw recruitment and organization of volunteers. These volunteers are incredibly important to the race because they help us keep the number of lost runners down to a minimum. No one wants to be “that” race, and Angela ensured that we had volunteers at the turns and that drivers were cautious. The train…well, we can’t do anything about the train!

If you didn’t pick up your race packet or medal, please contact us. We can’t really afford shipping items, but we’d love to be able to get those to you if we can. 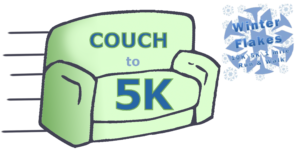 Have fun getting fit with the Winter Flakes Couch to 5K program. Meet up with friends and family and join in on this great way to meet your 2019 health goals! This program is designed for the novice runner*. No pre-training is necessary, since it is designed for the “couch potato”.

The 2019 Winter Flakes Couch to 5K program starts Wednesday, January 2, 2019. This eight-week training program involves a weekly session with a running coach, a training plan, and weekly communication with nutrition tips and information. The cost is $45 and also includes the Winter Flakes 5K registration and race shirt for free (a $20 value). Participants will receive a stylish accessory and other participation prizes along the way! The weekly training sessions will be at Walther’s Park, depending on weather. Youth must have parental consent.

The training sessions will culminate with the Winter Flakes 5K run/walk on Saturday, March 2, 2019! All proceeds benefit Get Healthy De Soto programming, including trail development, Walking School Bus, community gardens, and more. Ready to register? Complete the form below or register online here.

*As always, please consult with your healthcare provider before starting any nutritional or physical programs if you have any previous, current or possible medical conditions. These guidelines, recommendations and suggestions are not stated to cure, treat or prevent any diseases or conditions.

Brought to you by Get Healthy De Soto and the Jefferson County Health Department…working together for better health.

More information will be available soon…

March 18, 2017 turned out to be a great day for the Winter Flakes Race. There were 236 participants, and a good time was had by all.

A special thanks to the organizations that sponsored the event and the countless volunteers who helped direct traffic, distribute water, and donated time to the race coordination.

The race results can be found here.

The race route for the Winter Flakes Run has been finalized and is now available! 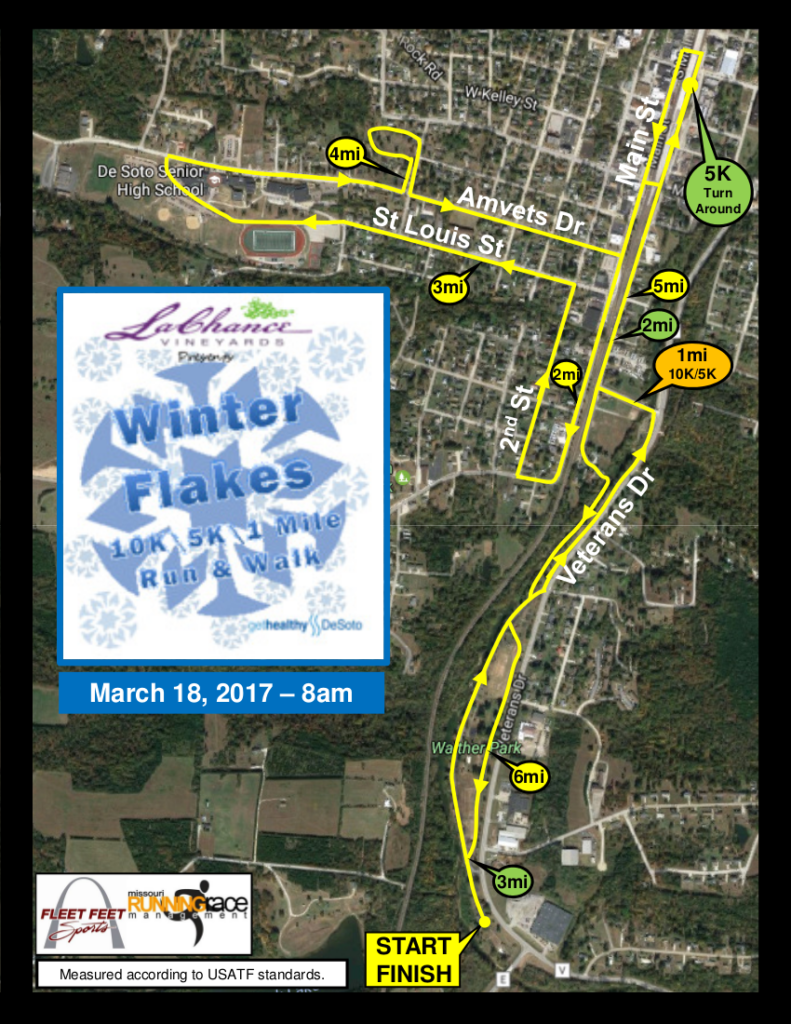